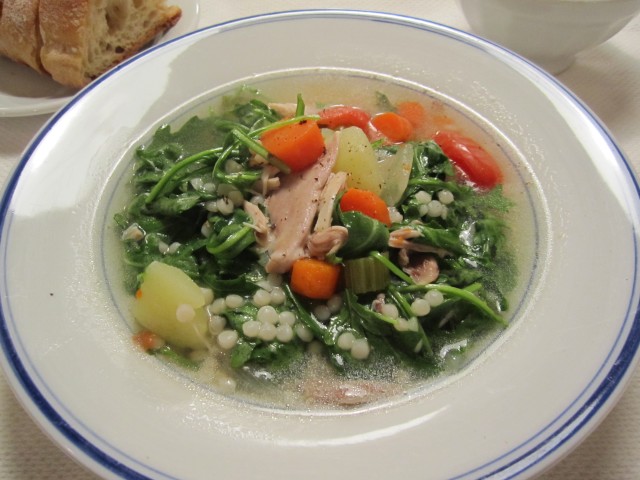 There are some days on which nothing but a pot of chicken soup will satisfy.   Despite the many subtly different ways I’ve learned to make chicken soup, this is the one that I always go back to–the one my mother made.

This soup is made with a whole chicken, onion, celery, carrot, potato, tomato, bay leaves, parsley stems and whole black peppercorns.   I’ve tried adding ingredients (parsnip, turnip, dill, leek or scallion) or taking away ingredients (the tomato, the bay leaves, the carrots) but my mother’s combination is still the one that resonates with me.

As I pointed out in an earlier post, it’s very easy and economical to make a broth with chicken or turkey parts (wings, legs, thighs), celery, onions, and a bouillon cube.  For that broth I don’t peel the vegetables, then I discard them at the end.

For this soup, however,  I clean and peel the vegetables, cut them into bite-size pieces, and make an entire meal of the soup.  I sometimes serve the broth with some pasta as a first course, then the chicken meat and vegetables as a second course.

Alternatively, I like to serve this soup as a one-pot meal, which is what I’m doing tonight.  I’m adding some nice pearls of Israeli couscous, which are similar to Italian Acini di Peppe, but larger and with more bite.  Rather than making a salad on the side, I’m adding baby arugula right to the broth at the last minute–it gives the soup a wonderful green color and a bright lemony flavor.  You could substitute baby spinach, but you should blanch it in water and squeeze it before adding to the broth, lest you get that aftertaste of iron in your broth.

At the end of the evening, I store the meat, broth and vegetables all separately, so I can assemble more of the same soup tomorrow, or use the broth  or meat as a component of another dish in a couple of days (or freeze it).

It takes about 2 hours from start to finish, but in those two hours, your house will be filled with an aroma that’s a worthwhile reminder of mom.

3 ribs of celery with leaves

6 parsley stems, tied in a bundle for easy removal

Put chicken in a stockpot or dutch oven and cover with water.  Use an 8 or 10-quart stockpot for this–any larger and you run the risk of making a weak broth from too much water and not enough chicken.

Bring to simmer and lower the heat to low.  Simmer uncovered and skim and discard the froth that surfaces during the first half-hour of simmering.  Let the chicken simmer by itself for an hour.

Add the remainder of the ingredients and bring back to simmer.  After about 10 mintues, check for salt and begin adding salt a teaspoon at a time.

Let the soup cook for another hour, then let rest.

Remove meat from the chicken and set aside.

Boil pasta in water for the recommended period on the box, then add to the broth and let simmer for a few minutes with the vegetables.  Add the baby arugula and serve within a few minutes.

We always sprinkled on grated pecorino romano at the table.

Broth can keep in the fridge for 5 days or frozen indefinitely.