It’s been a while since a dish inspired me to write about it, but a couple of weeks ago, I was invited to dinner at the home of friends who’ve been living in Italy for the last 30 years and have a winter home here in Florida.  They have an impeccable sensibility, so I knew the meal would be great.

The meal was a simple buffet, which consisted of thinly pounded and breaded chicken cutlets, broccoli di rapa (simply dressed with olive oil from their own olive trees), and lasagnetti with artichokes.  Everything was simply prepared and beautifully presented, but the pasta impressed me the most–it had a complex, rich flavor that I couldn’t quite identify.  The combination of artichokes and heavy cream was one I’d never tried, so I was intrigued enough to try my hand at making the dish.

My friend Paul was kind enough to share the recipe with me, so I’ve made it a couple of times, until it was to my satisfaction.  Paul used baby artichokes, which he was quick to point out, are a different breed in Italy than they are here in the states.  Although the baby artichokes in our supermarket look healthy and green and have no chokes, they still require extensive cleaning and discarding of leaves until only the most tender and palest leaves are left.

The first time I tried to make the dish, I used baby artichokes (as Paul did), but I made the mistake of not stripping them enough.  I’ve written posts on artichokes in the past, and failed to take my own advice, which is that artichokes–even baby ones, when cleaned properly, result in 90 percent waste and 10 percent edible product.

So I decided to re-try the recipe using large globe artichokes, cleaning them mercilessly, until only the palest green-white pieces were left.  After I cleaned the artichokes (and before slicing them), I placed them in a deep bowl of water, sprinkled with  a couple of tablespoons of flour, instead of lemon juice–a trick that Paul shared with me.  It works as well as lemons, but without the wasted lemons.

The artichokes are sautéed in olive oil and garlic,  white wine is added, then the mixture is simmered for 15 – 20 minutes until tender.  This step can be done ahead, then at the last minute, as the pasta is nearing completion, heavy cream is added to the artichokes, along with a generous sprinkle of parmigiano cheese.

I suppose that the quality I couldn’t identify in the dish was the heavy cream.  It truly elevated the artichokes to regal heights.  Their acidity was both heightened and tempered by the richness of the cream.

If you don’t often use heavy cream (as I do not), this dish will be an extraordinary treat. 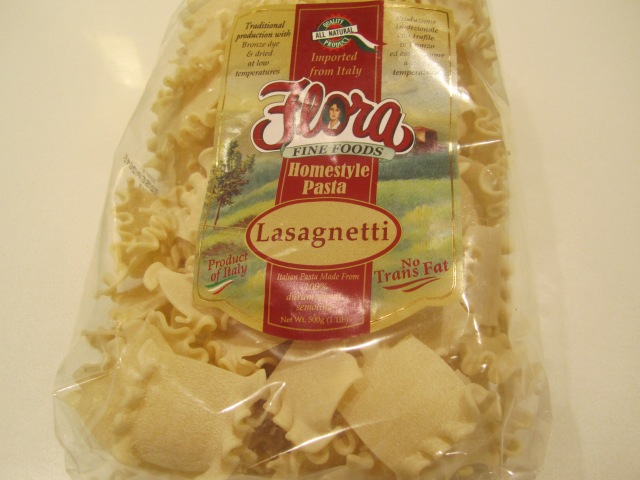 4 cloves garlic, peeled and split in half

salt and black pepper to taste

Fill a mixing bowl with water and stir in the flour with your hands until it is dissolved and the water is a murky, translucent white.

To clean each artichoke, slice crosswise with serrated knife about 1 1/2 inches above the stem.  This will result in the elimination of 80 percent of the top of the artichoke, leaving a bottom with stem attached. 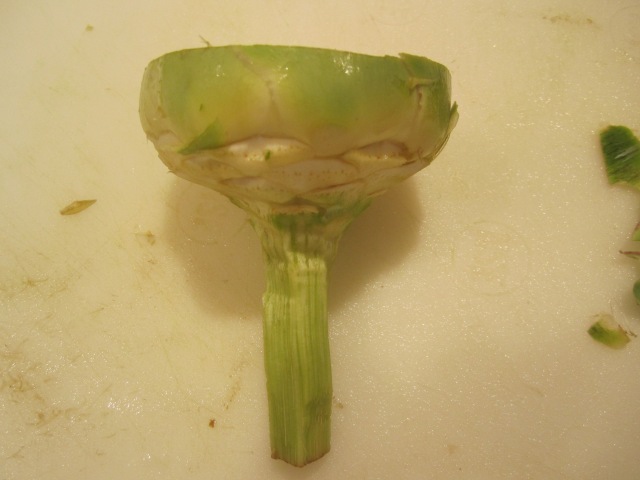 Peel off any deep green outer leaves which remain on the bottom, then with a paring knife, peel the outside of the bottom and the entire  stem.  You can separate the stem from the bottom, if this is easier.  NOTE:  If the stem is still a deep green, even after you’ve peeled it–discard–it will be too fibrous.  The main way to tell if you’ve gone far enough is that the remaining parts of the artichoke should be pale green–almost white.

Quarter the bottom, and working quickly, slice out the choke (the cotton-y mass that lines the inside of the bottom) from each quarter.

I find that this is the easiest and quickest way to remove the choke.  You want to work quickly because the artichoke discolors instantly once peeled.

Immediately submerge the peeled and cleaned quarters in the bowl of flour and water, and continue cleaning the remainder of the artichokes. 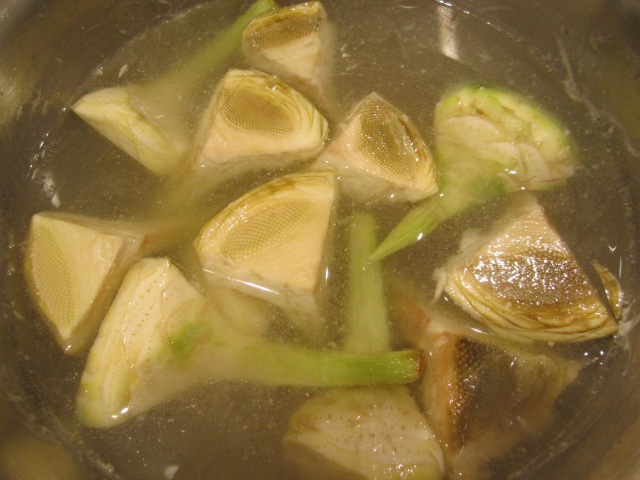 In a skillet, begin slowly browning the garlic and olive oil on very low heat.

Remove each quarter of artichoke from the water and slice thinly. 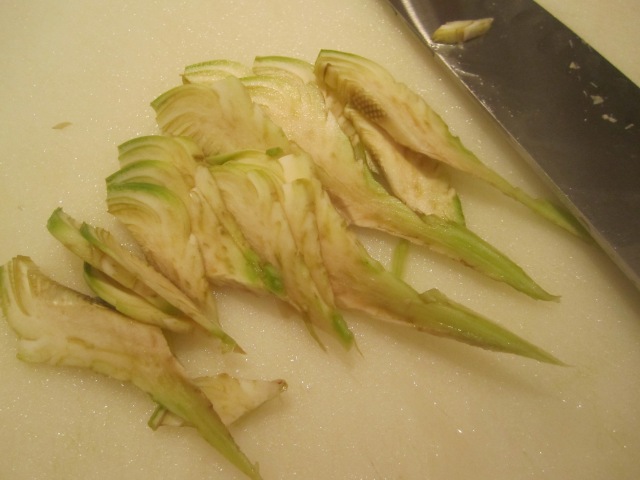 Allow the artichokes to saute on low heat for 5 – 7 minutes on medium heat.

Add the white wine, turn heat to low, and cover, continuing to simmer for about 15 minutes.  Taste for salt and pepper and remove from heat.

The dish may be made to this point up to an hour ahead of serving.

When ready to serve, cook the lasagnetti in plenty of salted boiling water until 2 minutes shy of done.  Place the skillet of artichokes on high heat and add heavy cream.

Bring sauce to a bubbling boil, and add drained pasta, along with 2 – 4 tablespoons of pasta water, to thin slightly.

Saute the pasta over high heat for a minute or so, adding more pasta water if the mixture is still too tight.  Dress with freshly chopped parsley and plenty of grated parmigiano.  Pass more parmigiano at the table (there can never be too much).