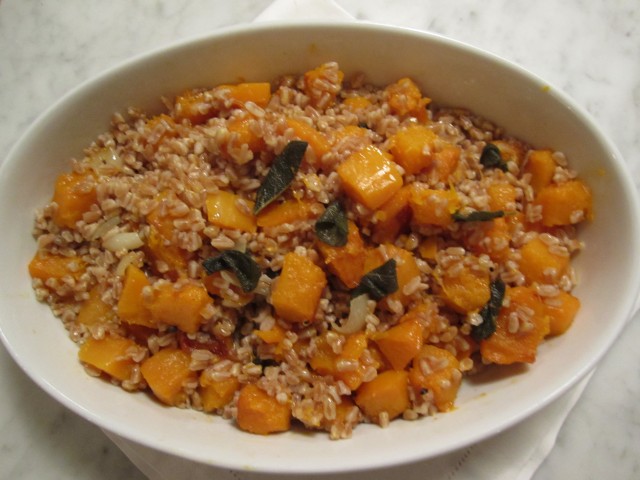 This simple combination of butternut squash and farro is as soothing and comforting as it gets.  It’s sweet, nutty and rich-tasting without actually being rich.  It can serve as a main course (totally vegetarian) or side dish.  It reheats beautifully in a skillet with a couple of tablespoons of broth or salt water.

For this dish, the butternut gets peeled, seeded and cubed, then sauteed with onions and sage.  The finished squash is simply tossed with cooked farro and some of the cooking liquid from the farro.

I like to make more squash than I need for the farro and use the extra cooked butternut later in the week to toss into a salad with some sturdy chopped baby greens like baby arugula, or watercress,  mint, parsley, some oil and red wine vinegar, and it ends up acting a bit like an Italian tabbouleh–I’ll make it for you sometime.

Alternatively,  you can heat up the leftover butternut and toss it with pasta like cavatelli or ziti, drizzle with butter or extra virgin olive oil and add lots of parmiggiano on top.

While I was at the market, I got inspired to make a salad to go with the farro . . . I noticed the pomegranates were extraordinarily plump, red and firm–I held one and could tell it would be good (heavy and solid–no soft spots).

I’ve had some pears ripening at home for about 4 days now, so I’m going to combine sliced pears with the pomegranate seeds and baby spinach.  It’s a salad that is light but wintry.  I’m dressing it with my simple combination of red wine vinegar, olive oil and agave.

Tonight, I’m serving the salad after the pasta, since it’s a refreshing palatte cleanser and almost feels like dessert.

Serves 4 as a side dish

Place farro in a saucepan filled with cold water.  Bring to boil, add salt and cook uncovered for about 20 minutes or until tender.

Heat oil in skillet and add butternut cubes, sage and nutmeg.  On medium-high heat, cover and saute for about 8 minutes (stirring it and shaking the pan every few minutes to make sure it’s not stickiing).  Add onion and cover again for another 8 minutes.  Uncover and saute until squash is tender and onions are slightly golden.  Add salt and pepper to taste.

Set aside half the squash for later use.  Combine the squash and farro and add some cooking liquid from the farro.  Taste and add salt and pepper.  Drizzle with extra-virgin olive oil and serve. 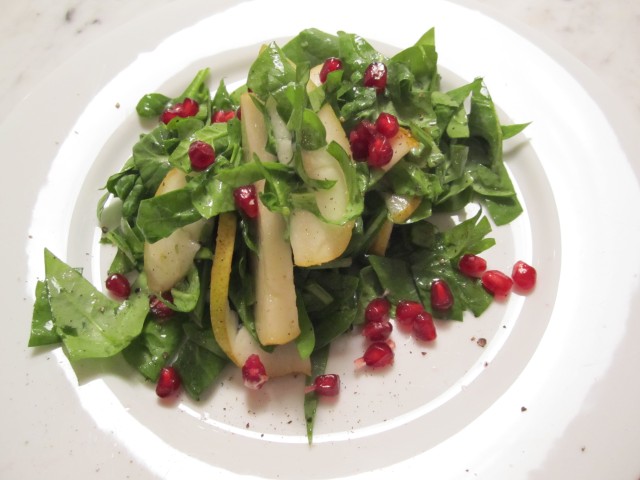 5 ounce package of baby spinach, cut into 1/2″ ribbons (or serve them whole)

To seed a pomegranate, take off any valuable sweaters and put on an apron (even if all you’re wearing is a tee-shirt).   Place a deep mixing bowl in the sink and work inside the bowl–it’s very messy and the juice will squirt and stain anything in sight.  Simply cut the fruit in half crosswise and start pulling apart each little section of the honeycomb inside.  Run your fingers along the inside wall of the peel and between the membranes and gently scrape out all of the seeds from each little section of the white honeycomb. Discard the white membranes.  When you’re done, you’ll have  a nice juicy bowlful of ruby-colored seeds to sprinkle or just eat as they are.  It’s a little messy, but don’t be dissuaded–once you taste a spoonful of seeds, you’ll be happy you did it!

In a mixing bowl, toss spinach and pears with vinegar, then agave, then oil.  Add salt and pepper and toss.  Sprinkle with pomegranate seeds and serve.

This entry was posted in Pasta, Vegetables. Bookmark the permalink.