My dilemma is what pasta shape to present with the soup.   I don’t know if he would prefer something delicate like angel hair, or something sturdier like tubettini or ditalini.  I’ve decided on orzo, since it’s small and delicate, but sturdy, and goes well with broth.  I won’t actually cook the orzo, since it would get gummy and soft sitting in the broth overnight.  Instead, I’ll simply give him a small box of orzo to make (or not) with a pot of broth.

I’m going to make the broth with celery, carrots, onions, some parsley stems and a bay leaf.  (For the full recipe, see my prior post “Mom’s Chicken Soup”).  After the vegetables have released their flavors, I’ll discard them and boil a new potato and some new carrots and leave them in the broth.  I’ll take the chicken meat off the carcass after it cools a bit and add it to the broth, and leave the whole thing in the fridge overnight.   Tomorrow, I’ll present the broth with the  box of orzo on the side.

Last fall, Beppi made us a meal upon our return home from a two-week vacation in Italy, and I’ll never forget how much I appreciated coming home to that meal.  The meal he welcomed us home with was leek and potato soup (leeks from his garden) with orrechiette, pot roast (red-winey and sublime), a salad of baby greens from a local farmstand, and a loaf of bread.  It’s one of my most treasured memories of that trip.

For my own dinner tonight, I’m going to have  the last of the leftover bean soup from my “Mixed Bean Soup” post the other evening, with a couple of additions . . .  I’ve added some tomato puree to the beans and simmered the soup for about fifteen minutes, then added  some cooked swiss chard and cooked orrechiette.  That touch of tomato really perks up the deep flavor of the beans and makes it taste like an entirely different and new dish.  The dense bean mixture ends up acting more like a sauce for the pasta and swiss chard, rather than a bowl of soup–it’s a great transformation! 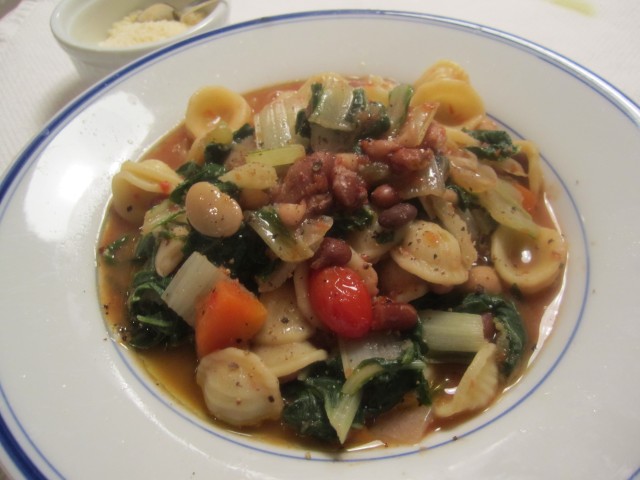