Dinner in the City–Roast Salmon with Fennel and Red Peppers

Once again, I am at my city apartment and I need an easy meal that doesn’t require a lot of prep work, ingredients (I don’t keep a full pantry in my city apartment), pots and pans (no room on the stove), or a lot of washing of vegetables (tiny sink and slow drain).  I don’t like to fry or sear things (lingering odors), although I sometimes do, anyway.

That leaves roasting or poaching.  Tonight’s dinner was made on my one pizza tray (with the exception of the broccoli–which you could omit and substitute a salad for).  With the exception of the salmon, the ingredients were all cut into bite-size pieces and roasted in a 400 degree oven for about a half hour.  Then I added the piece of salmon  (skin side up) and  continued roasting everything for another twenty minutes.  Everything should be ready at about the same time, but if the potatoes are not yet ready, just remove the other components from the roasting tray and continue roasting the potatoes for another 5 or 10 minutes.

1 bulb of fennel, cut off at the top of the bulb, outer pieces removed and discarded

Slice red peppers in half then lengwise into 1/2″ strips.  Remove core from fennel and slice crosswise into 1/2″ half-moons.  Dice potatoes into 1″ cubes.  Lay all out on tray and drizzle with oil, salt pepper and herbs de provence. 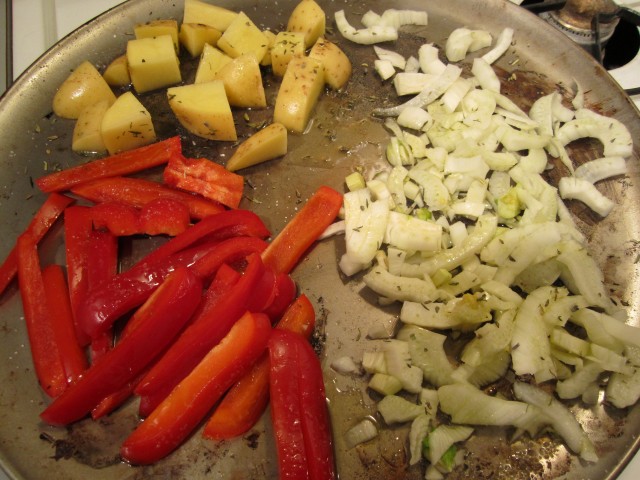 Roast uncovered for about a half-hour, turning occasionally.  If fennel blackens too quickly around the edges, stir the well-done pieces toward the center of the tray and scatter the less cooked pieces on the perimeter; same with peppers.

Season the salmon with salt and pepper and add it to the tray, skin side up, moving  the fennel toward the center of the tray (because it’s already almost cooked and the center of the tray gets the least heat), and placing in the salmon filet to one side.  Continue cooking until the salmon is just cooked through (maybe about 20 minutes, depending on the strength of your oven.  If any of the piles of vegetables are getting too well-done, remove them and set aside until the rest is finished.  When the salmon is done, I pull off the skin with tongs before adding salt to the skin side and drizzling on a little extra-virgin olive oil at the table.

This entry was posted in Seafood. Bookmark the permalink.