Roast Chickens on the Grill 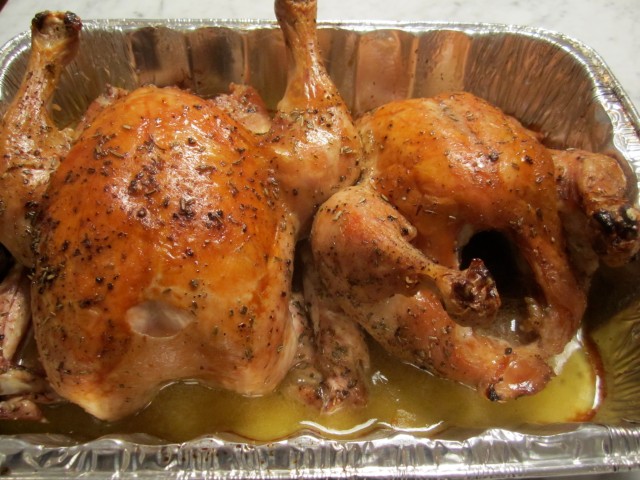 Although I make this dish on the grill, I can’t really call it grilled chicken–it’s more of a high-heat roast chicken that happens to cook in a pan on the grill.  It has a couple of advantages over traditonal grilled chicken pieces.  It’s nearly foolproof–it doesn’t need to be watched closely and turned constantly for fear of flareups.  Therefore, it’s great to make for guests because it can cook on its own for an hour or so, then be allowed to rest for up to a half-hour and stay piping hot when it’s carved.  Also, because these birds are roasted whole, you can fit several on the grill (2 to a pan) and potentially feed a crowd from just one round of grilling.

I’ve bought my chickens from a local farm that raises their own chickens (no need to label these “organic”) and they are always a treat–much more succulent and tender than commercially raised birds. I’m making two chickens tonight because they’re small and I want leftovers for lunch.  Earlier in the day (about 5 or 6 hours ahead of cooking them), I season the chicken with herbs, salt, pepper and oil.  They are placed side by side in a foil baking pan, covered tightly with foil and allowed to sit in the fridge until about a half-hour prior to roasting.

The grill is preheated to high, then the entire covered foil tray is placed on the grill rack and the grill cover closed.  I turn the grill to medium and let these roast covered for about a half-hour, then I remove the foil cover and continue to roast for another half hour or until they become mahogany brown.  Let rest for up to a half-hour (but at least 10 minutes), then carve.

I like to carve my chicken in the following way:  remove wings, legs and thighs, then remove breast lobes from the bone and cut each lobe in halves or thirds, so everyone can have a little white meat and a little dark meat.  One small chicken (3 lbs) serves about 3 people.

Serve with roasted eggplant, peppers and tomatoes and a green salad.

Roast Chickens on the Grill

2 small (about 3 lbs each) chickens

About 5 or 6 hours prior to cooking, place chickens in foil baking tray and rub with olive oil, salt, pepper and rosemary. 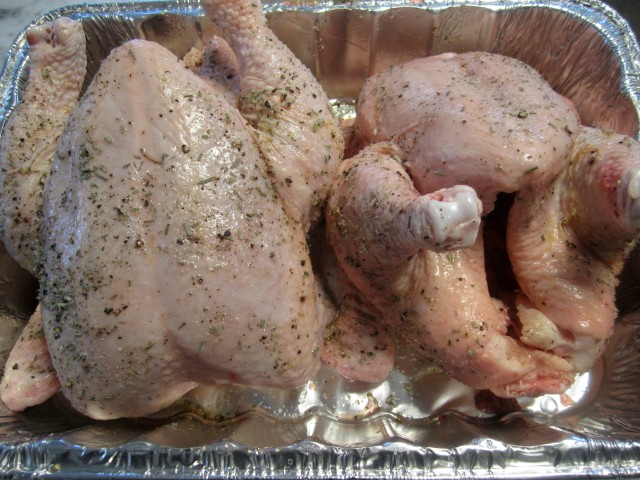 Remove baking dish from fridge a half-hour prior to roasting.

Preheat grill on high and place covered foil tray on grill rack.  Close grill lid, reduce heat to medium and roast for a half-hour.  Remove foil and baste.  Roast for another half-hour uncovered, but with grill lid still closed.  Baste from time to time.  Let rest for at least 10 minutes (and up to 30 minutes) prior to carving.

This entry was posted in Poultry. Bookmark the permalink.