These are straight from my mother’s home town in Calabria and straight out of my own childhood.  I never liked eggplant as a child, but I always liked these fritters–probably because they’re as much cheese and breadcrumbs as they are eggplant.    Essentially, these are meatballs without the meat–only much moister, since eggplant is mostly water.

They require a bit of advance preparation, but this can be done the day (or days) before. The eggplant gets peeled and diced, then drained well and squeezed well.  Then the breadcrumbs are added–seasoned ones.  Generous amounts of pecorino romano and black pepper are added.  Fresh chopped parsley and basil are added as well.  The whole mixture is kneaded and incorporated with hands, then formed into patties.  The patties are then dredged in additional bread crumbs, then pan fried in olive oil.

I’ve made a modification to my mother’s recipe (after much experimentation) although I don’t tamper with old-world recipes lightly.  I switched to cornmeal as an exterior coating on the fritters–it stays crispy (even when they cool), and gives the exterior of the fritters more of a contrast to the interior.

My proportions of ingredients (which I’ve measured carefully) produce a moist, light fritter, which tastes as good cold the next day as it does piping hot out of the oil.

The beauty of these fritters is that they can be prepared partly or entire ahead of time, then frozen.   For example, you can boil and drain the eggplant, then refrigerate it a few days (in a strainer, covered with plastic) or freeze it indefinitely, then proceed with the recipe.  Or–you can make the entire mixture and refrigerate it a couple of days (or freeze it indefinitely), then form the patties and dredge and fry.  Or–you can make the fritters completely, freeze them, then toast them in a 400 degree oven on a baking tray until they become crispy again.  In no way do any of these advance preparations impact on the quality of the fritters–they hold beautifully in the freezer.

Since these fritters are very rich and earthy-tasting, I like to serve them as an appetizer with a green salad dressed with red wine vinegar and olive oil.  Some sweet tomatoes (or chopped tomato) are great on this salad, since eggplant and tomatoes are a perfect match.  In addition, I like to sprinkle some goat cheese or feta over the salad (although you could do without it).  This could easily be a lunch in itself.

Peel the eggplant (leaving some stripes of peel on for flavor). 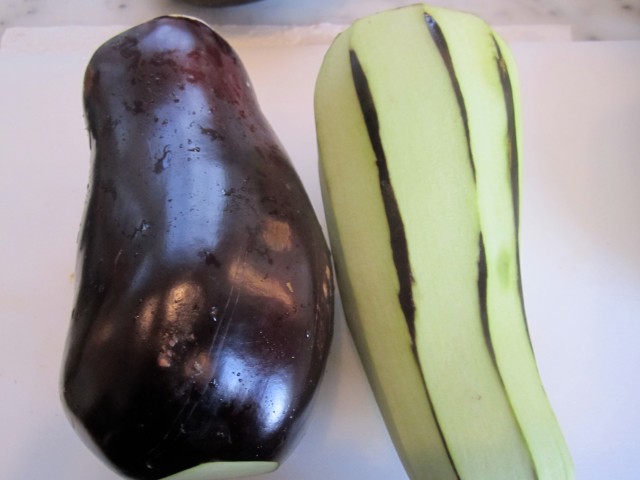 In a large pot of salted boiling water, drop in peeled, diced eggplant cubes.  Don’t worry about crowding the pot, just pack it all in and keep stirring the eggplant and pressing the cubes down into the boiling water.  Boil for 15 – 20 minutes, or until eggplant is tender and translucent. 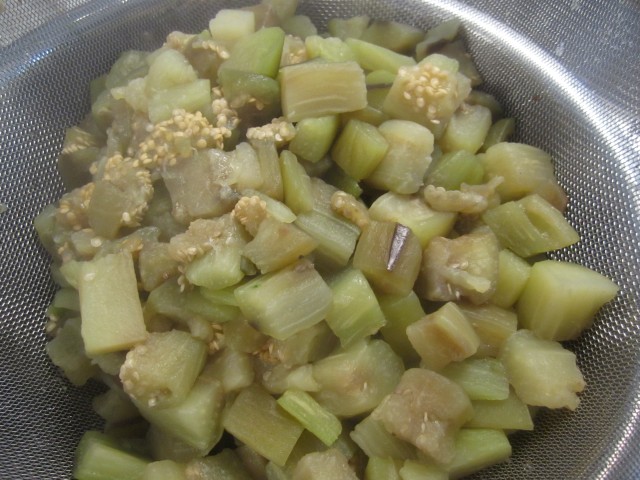 Drain well in a strainer (a couple of hours, if possible).  In small handfuls, squeeze between hands to remove more water (it’s not easy to squeeze–very slippery).

Place eggplant in a large mixing bowl, then top with remaining ingredients, except eggs.

Stir and incorporate well.  Taste for salt and add, if necessary.

Add eggs, then incorporate, kneading with hands.  After adding eggs, batter can be frozen, then later thawed and made into patties and fried.

When ready to fry, form batter into patties approximately 2″ in diameter. 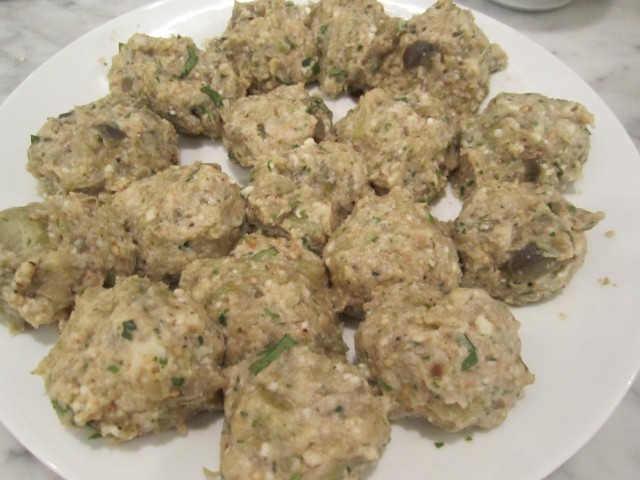 Dredge patties in fine cornmeal, then shake off excess.

Carefully slip patties into 1/4″ of hot olive oil and fry until golden on each side–approximately 4 – 5 minutes per side.  They will be crispy on the outside, tender and moist on the inside.

Serve immediately or let cool to room temperature.  May be frozen, then thawed and toasted in the oven at 400 degrees for 15 minutes.