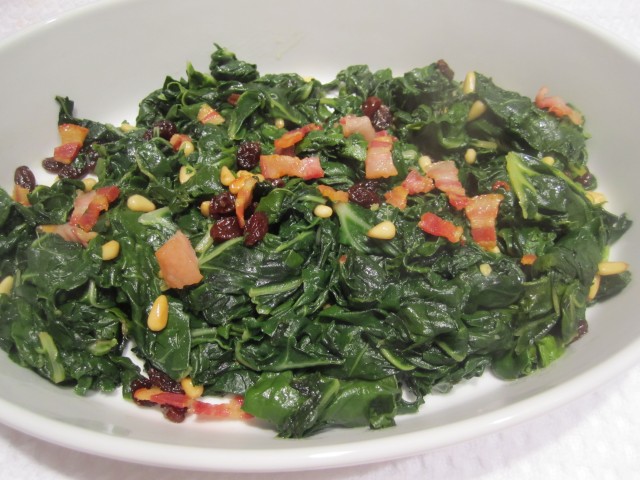 Swiss chard is one of my favorite green vegetables because the entire plant is edible from top to bottom.  I don’t see it on restaurant menus as much as spinach or broccoli, so when I see it, I always order it.  Last week I saw it on a menu and the preparation sounded great–pancetta, raisins and pine nuts.  Although I’ve made swiss chard with pancetta alone, and  swiss chard with pine nuts/raisins, I’ve never combined pancetta, pine nuts and raisins.  When the dish arrived, it contained only the leaves of the swiss chard–no stems.  It was quite delicious, so I decided to try making it on my own.

I wanted to duplicate the dish faithfully, but I couldn’t bring myself to throw away the stems.  Therefore, I removed the leaves from the stems and blanched them both separately, reserving the stems for a later use.  From these three bunches of swiss chaird, I ended up making three separate dishes on three consecutive evenings.

The first evening was my rendition of swiss chard (leaves only) with pancetta, pine nuts and raisins.  The second evening, I sauteed the swiss chard stems with peppers and onions.  The following day, I made a frittata with the leftover sauteed stems and peppers, with a touch of ricotta salata–all were great!

Drop swiss chard leaves in a pot of well-salted boiling water and blanch for approximately 5 minutes after the water returns to the boil (can be done in batches–don’t overcrowd the pot–especially if you’re at the mercy of an electric range).  Drain and set aside.

In a cold large nonstick skillet, add oil and pancetta and turn heat to medium.  Cook until pancetta begins to sizzle and render (about 6 minutes).  Remove pancetta and set aside. Add pine nuts to the hot fat and saute only until the first of them begin to turn golden (about a minute).  Add raisins and continue sauteing for about 30 seconds, until they begin to expand and caramelize.

Immediately add in the drained swiss chard and saute, tossing and turning to coat the leaves with the fat.

Taste and add salt if necessary.  Saute for about 4 – 5 minutes on medium heat, then sprinkle with pancetta and serve. 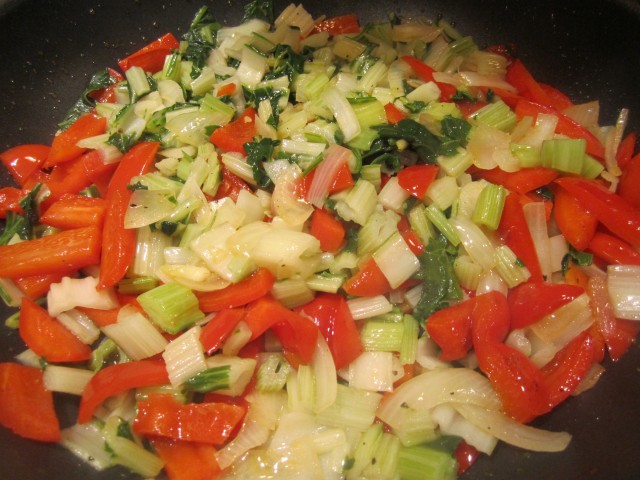 3 red peppers, seeded and cored, and sliced into 1/2″ strips

Drop stems into well-salted boiling water, and allow to cook until crisp-tender–about 8 – 10 minutes.  Drain and set aside.

In a large, unheated nonstick skillet, add peppers and onions.  Turn heat to medium and saute for about 5 minutes, or until just beginning to caramelize.  Add swiss chard stems and cover for another 10 minutes, tossing occasionally.  Taste and add salt, if necessary.

Uncover and saute on medium-high heat until all is tender and caramelized–another 5 minutes or so.

In an 8″ nonstick skillet, add oil and vegetables and turn heat to medium-low.  Saute until vegetables are heated through.

Combine egg and cheese mixture while vegetables are sauteing.

Add beaten egg/cheese mixture and begin stirring and folding, lifting the outer edges to allow the uncooked egg to run to the bottom of the skillet.

After about 2 minutes of stirring and incoroporating, turn heat to lowest and leave skillet undisturbed for about 3 minutes.  Gently lift one side of the frittata to see if the underside is browning.  When underside is golden.  Place a large plate on top of the skillet and invert the plate over the skillet.  Quickly slide the frittata back into the hot skillet, uncooked side down.  Let brown undisturbed for about 5 minutes (or until golden on the bottom).

Allow to rest for 5 minutes before serving.