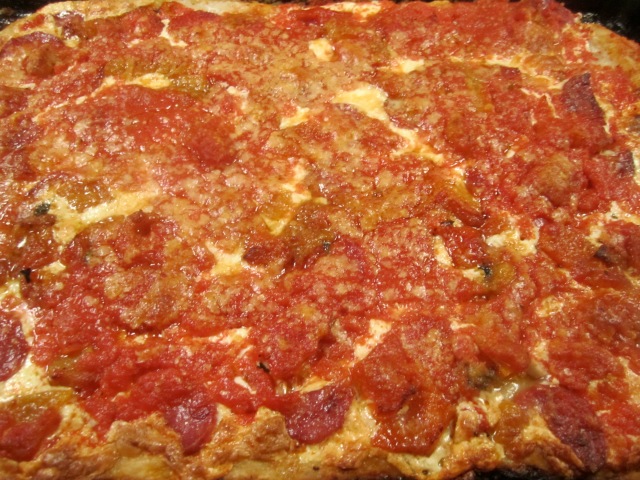 This past weekend, we entertained a group of twenty-somethings for dinner and the suggestion of pizza seemed to meet with everyone’s approval.  I looked back on my prior two pizza posts (Mom’s Pizza, and Zucchini and Ricotta Pizza) and decided to make some new variations, which I’ll share with you here.

Tonight, I made four varieties:

Ham and artichoke + tomato and mozzarella (sauce added after snapping the photo): 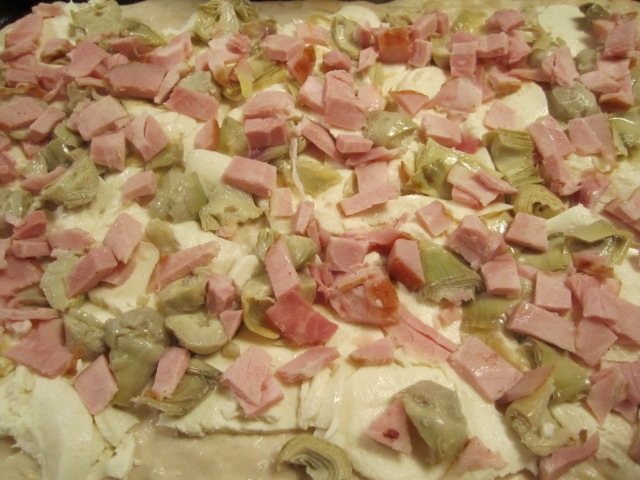 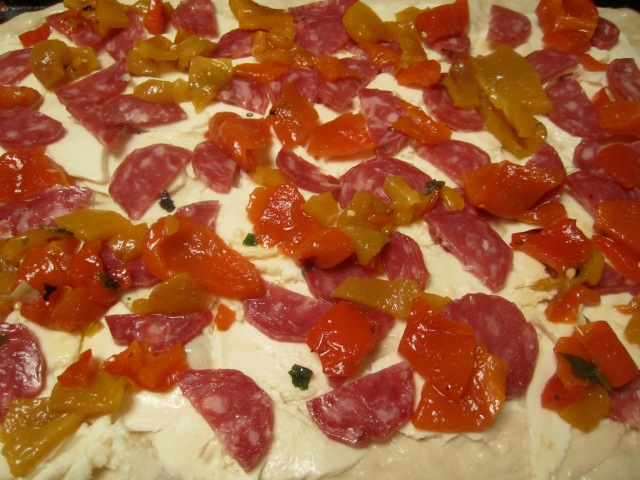 Pesto (spread on first), then chopped cooked spinach and ricotta. 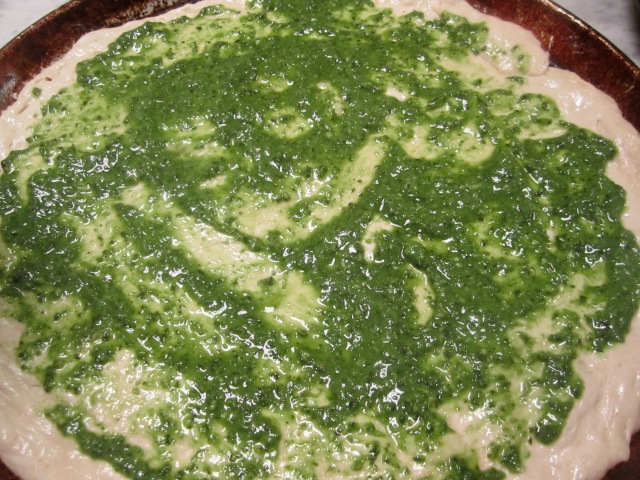 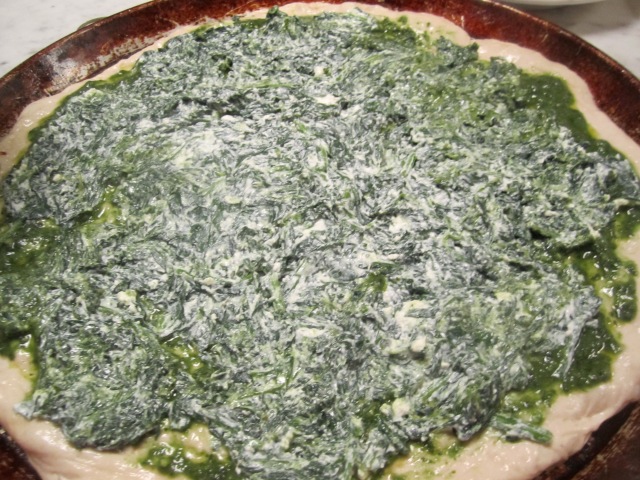 The last variation was by special request (no dairy), so I combined soppressata, roasted peppers, artichokes, and tomato sauce (added after photo was shot) to get as much moisture on the pizza as possible. 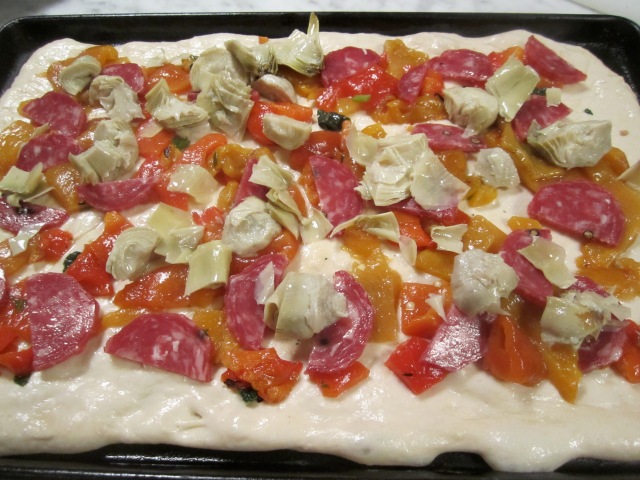 The technique was the same for each of these pizzas:  store-bought dough was brought to room temperature, then stretched on an oiled sheet pan.  I used one-and-a-half rounds of dough for each of my half-sheet pans and large round pizza pans.  Simply divide the dough rounds in half and add a half-round to each of the whole rounds.  Press and shape them together in the pan until they adhere to one another.  The total thickness of the dough should be around a half-inch.

Unlike pizzeria-style pizza, which is cooked briefly in a very hot oven, my pizza is cooked in a medium oven (350 degrees) for about an hour.  If you have convection, use it here.

The tomato sauce consists of whole peeled tomatoes, processed in the blender with plenty of olive oil ( a third cup of oil to a 28-oz. can of tomatoes) and a couple of basil leaves.  It requires no further cooking.

Also unlike pizzeria-style pizza, the cheese goes on first and the sauce goes on last.  Since the pizzas will bake for an hour, the sauce will act as a blanket of moisture, keeping the cheese and all the toppings from drying out.  In the case of a pizza without any tomato sauce, the last ingredient to go on top is a good drizzle of olive oil.

Tonight, I made use of my local gourmet market (Citarella) for my toppings:  spiral cut ham, roasted peppers, marinated baby artichokes and pre-sliced soppressata.  The ricotta was house-made, as was the pesto.

The surprise favorite was the ham and artichoke pizza.  It was reminiscent of a quatro-stagioni pizza, and was devoured within a matter of minutes. 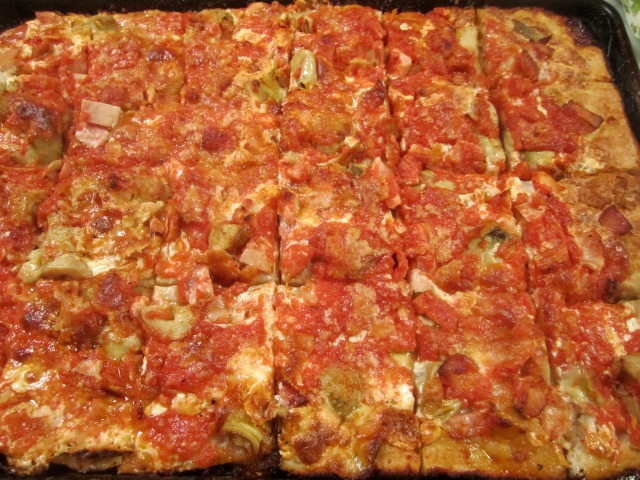 The only accompaniment necessary was a large salad of baby arugula, shaved fennel and carrots, dressed with olive oil, red wine vinegar, salt and pepper. 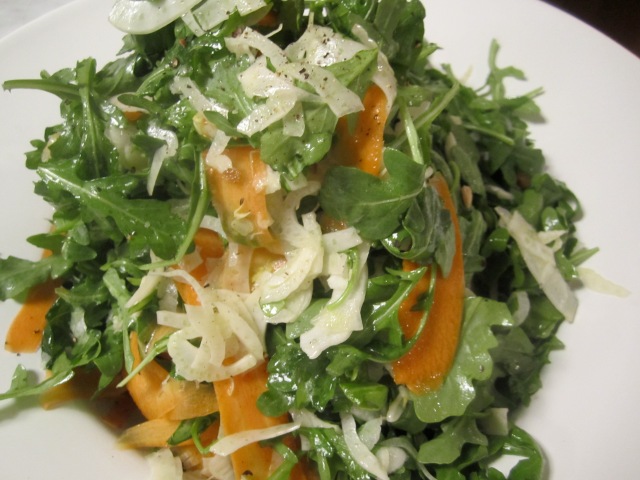 I’m not exaggerating when I say that these pizzas fed everyone into the night and the following morning as well!

This entry was posted in Uncategorized. Bookmark the permalink.