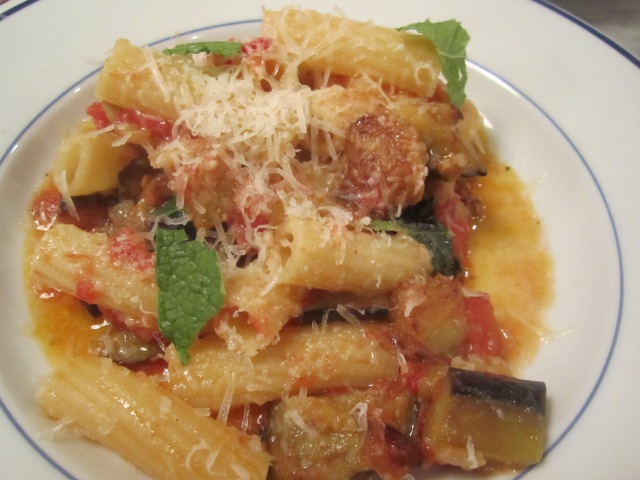 This time of year, eggplant is at the front and center of many of my meals.  This is my version of a classic pasta dish with fried eggplant, tomato and ricotta salata.

The eggplants at my local farm stand today were flawless–shiny and firm to the touch, without any bruises or puckering. 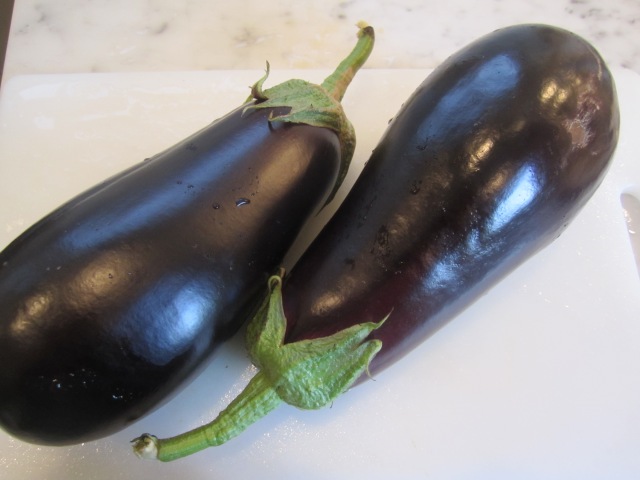 To prepare eggplant to maximum effect, usually requires time and work.  In traditional eggplant preparations, Italians often begin with peeling, dicing and salting the eggplant.  After an hour or so, it is squeezed, rinsed and dried.  This, it is said, eliminates any bitterness that might be present in the eggplant.  In addition, the salting and squeezing inhibits the amount of oil the eggplant will absorb when frying.

In my experience, the salting and squeezing is unnecessary when using freshly picked eggplants.  I have yet to experience any bitterness in my eggplants when buying them in their just-picked state.   As for their tendency to absorb oil, although they do absorb a good amount of it when they first hit the skillet, they later release some of that oil as they brown and caramelize.  The main reason, however, that I don’t salt my eggplant is that salting and squeezing changes the texture of the eggplant.  I’ve prepared fried eggplant both ways and I prefer the texture of eggplant that is fried in its just-diced, unsalted state.

One of the main features of this dish is that the eggplant is fried on its own until meltingly tender and caramelized.  The tomato sauce is made on its own, using fresh, peeled, diced tomatoes, a bit of red onion and olive oil.  The eggplant and tomato sauce are combined only at the last minute, so as to allow their flavors and textures to remain separate.

When the pasta is ready, the eggplant cubes and sauce are combined, along with a handful of mint leaves, and the pasta is tossed into the sauce.  The finished dish is showered with grated pecorino toscano. 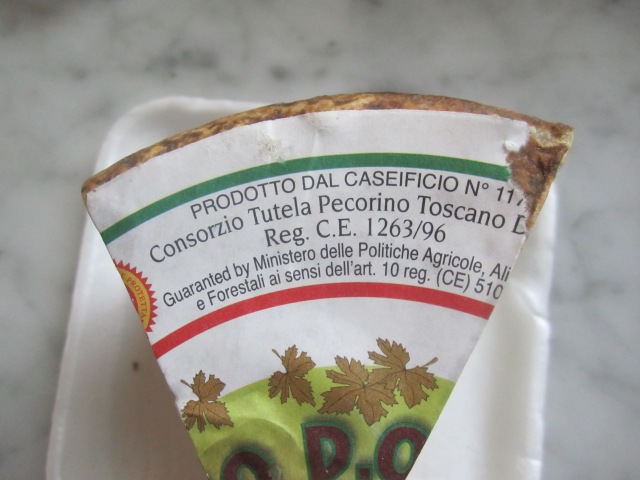 In the traditional recipe for pasta alla Norma, the finished dish is sprinkled with grated ricotta salata.  In my opinion, pecorino toscano (if you can find it) is more interesting and flavorful than ricotta salata, but if you can’t find it, ricotta salata is absolutely fine.

2 lbs fresh tomatoes (any variety, as long as they’re red, ripe and juicy)

Peel eggplant, leaving some strips of skin on.  I like to leave a bit of skin on, since the skin has flavor.  If too much skin is left on, however, the pieces become leathery and tough. 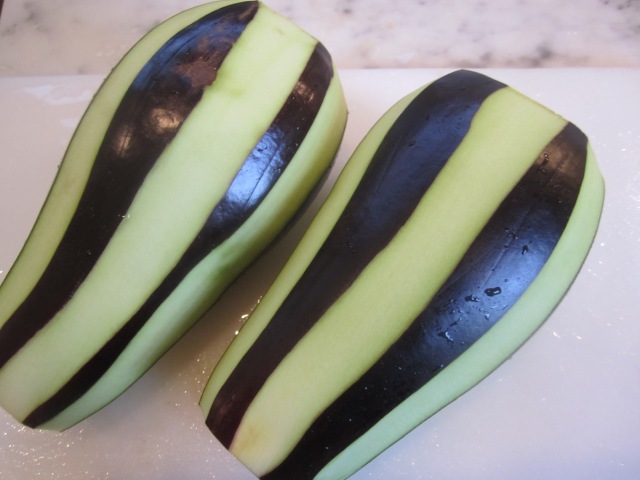 In a broad, nonstick skillet on high heat, place 1/2 cup olive oil.   When oil is shimmering and beginning to smoke, add half the eggplant and reduce heat to medium-high. 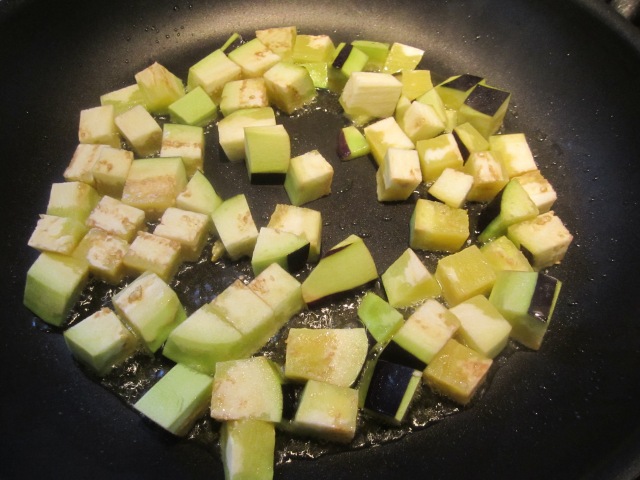 Saute, shaking and turning pieces until uniformly brown on all sides–approximately 7 – 10 minutes. 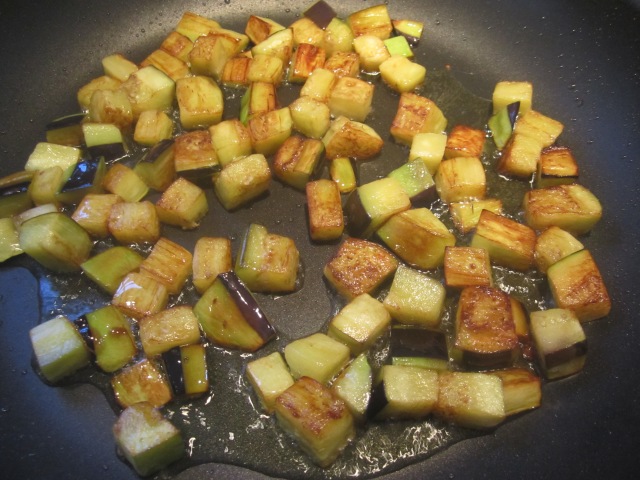 Repeat the process with another 1/2 cup of oil and the remaining eggplant.  When all is brown and soft, add a liberal amount of salt to taste.  It will take more salt than you think to make the eggplant taste well-seasoned.  Set aside. 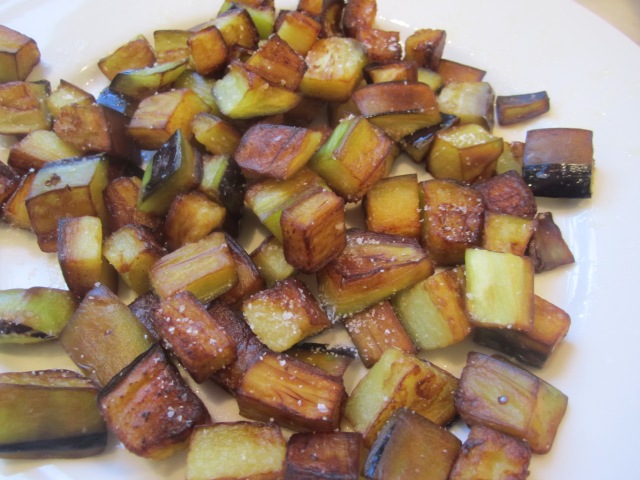 Peel tomatoes by dipping in boiling water for approximately 10 – 20 seconds.  The peel should blister slightly and slip off easily with your hands.  Dice tomatoes into roughly 3/4″ pieces.   In a skillet large enough to hold the entire finished dish, on low heat, saute onion in remaining quarter cup of oil until translucent and soft–approximately 10 minutes.  Sprinkle with a bit of salt, then add tomatoes. 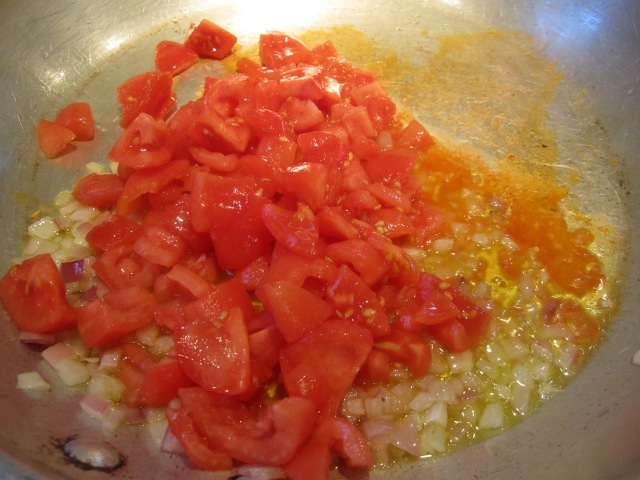 Bring to a simmer and cook for approximatly 15  minutes, or until tomatoes begin to break down and liquid begins to dissipate.   Add salt to taste. 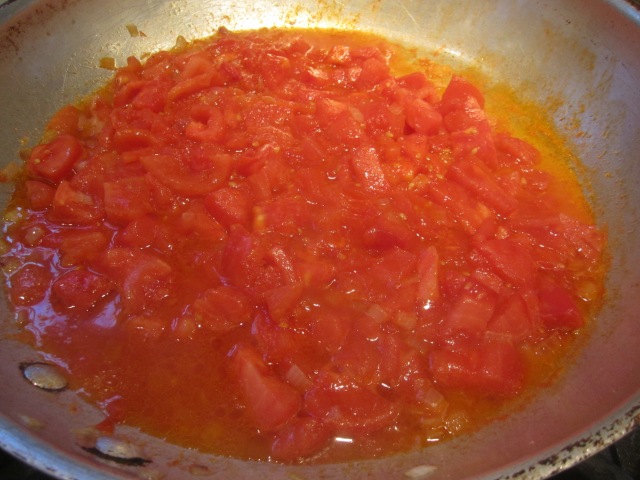 Remove from heat until pasta is ready.

Boil pasta in salted water until a minute shy of done.  Add eggplant to skillet with tomato sauce.  Top with mint. 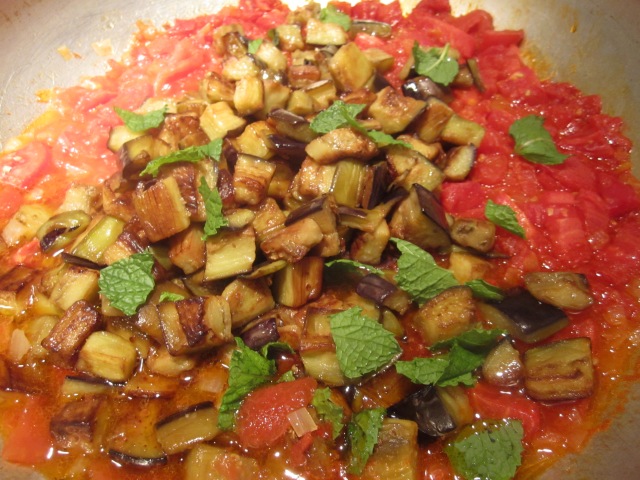 Toss in pasta.  Remove from heat and drizzle with 2 more tablespoons of olive oil.

Sprinkle and serve with a liberal amount of grated pecorino.