Dinner for One–Cavatelli with Kale, Leek and Toasted Breadcrumbs 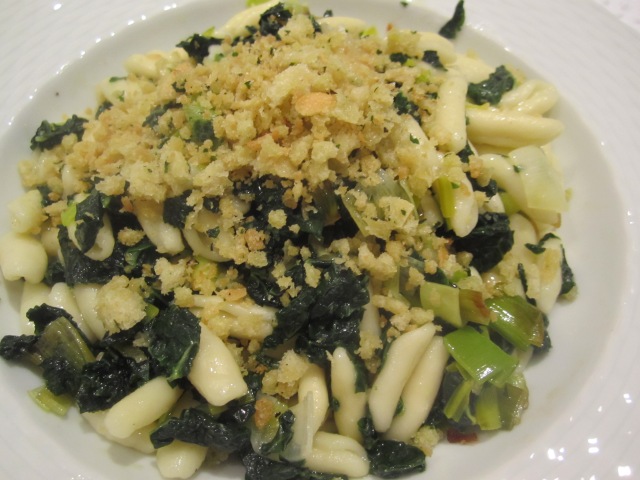 Cavatelli with toasted breadcrumbs, garlic and olive oil was something my mother used to make for us as children.  I always loved the combination of gummy, doughy cavatelli with the crisp, oily breadcrumbs.

This weekend, one of my guests gave  me the idea of combining my mom’s cavatelli with sauteed kale and leek.  I happened to have a piece of stale ciabatta and some tuscan kale left from the weekends’ meals, so after the guests left, I tried my hand at creating this dish for myself.  The results were worth sharing with you (and thank you, Aly, for the idea!)

I decided that plenty of garlic would be good in this dish, so I added some chunks of garlic into the breadcrumbs, as I sauteed them in oil.  In addition, I added garlic (and a hot chili pepper) to the skillet of kale and leeks.  Since I usually leave garlic in large pieces or slices, I had the option of removing the pieces prior to serving.  Tonight, the garlic was so fresh and sweet, I decided to eat all of it.

I used tuscan kale, but regular kale would do just fine for this dish.  The kale was cleaned, boiled, then chopped.  The leeks were sauteed with garlic and the cooked kale, then the finished dish was topped with the toasted crumbs.

As a first course, I duplicated a salad I had made over the weekend–shrimp, feta and heirloom tomatoes over mixed greens, dressed with plenty of lemon juice and olive oil. 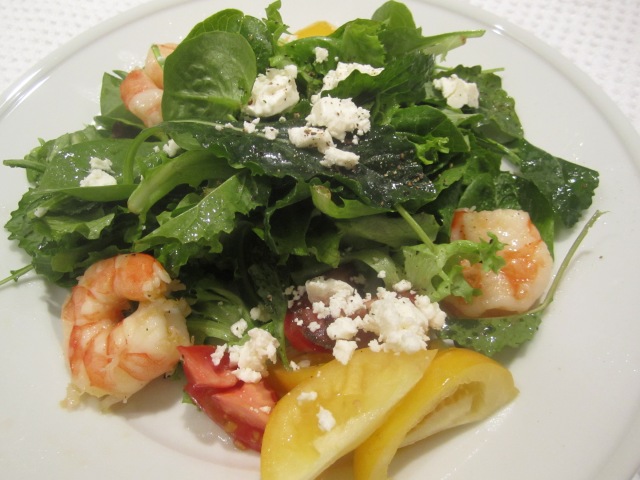 1 leek, white and light green only, cleaned and sliced in half lengthwise, then across into 1/4″ half-moons

a piece of hot chili pepper, or 1 pinch of chili flakes

1/2 c breadcrumbs made from stale bread

Make toasted breadcrumbs by placing 2 split cloves of garlic in a nonstick skillet with 2 tablespoons of olive oil.  On low heat,  brown the garlic until golden.   Add breadcrumbs, parlsey and salt and pepper to taste.  Toss and stir crumbs so as not to scorch. 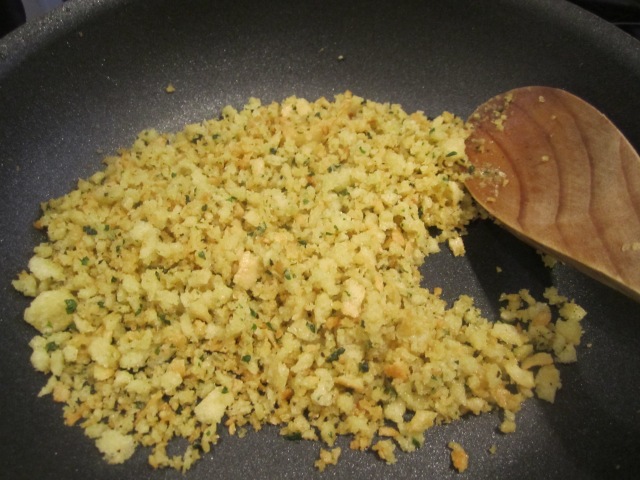 Toast until light golden, then remove and set aside.

While pasta is cooking, in a skillet, combine leeks, garlic, chili pepper and remaining 2 tablespoons olive oil.  Bring to a sizzle, while stirring and tossing.

When pasta is cooked, add to skillet of vegetables, along with another tablespoon or two of pasta water to loosen.

Toss and stir for a minute on medium heat.   Remove chili pepper prior to serving.

Serve topped with toasted crumbs and plenty of grated pecorino romano cheese.  Additional black pepper at the table is great as well.

2 Responses to Dinner for One–Cavatelli with Kale, Leek and Toasted Breadcrumbs